Rapid growth resulted in a Town Meeting vote in 1920 to double the size of the Power House, an expansion that was completed in 1926. Everett Pierce was named to manage the growing utility in 1921 at an annual salary of $2,700. That same year, the Light Board voted to give up the Light Plant’s appliance business and store on the Mill Dam, and later relocated it to the front of the office at 12 Main Street.

By 1923, total revenue was $96,282.51, with the iron foundry and other manufacturing plants at Concord Junction contributing to the growing demand for electricity. 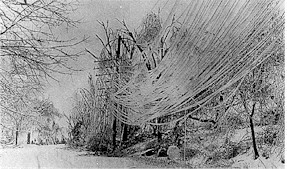 Also in 1923, the Light Plant lost its rental space with Macone Brothers and hired R.L. Wilson to build a 26 by 50 foot structure at the rear of the power plant for $3,983.17. Modern conveniences in the structure included electric lighting, steam heating, and a floor drain in the garage. The Light Board adopted another modern idea in 1928, when they voted for the first time to give all regular employees of the Light Plant two weeks paid vacation each year.

Concord’s thriving utility once again attracted the interest of the Edison Electric Illuminating Company of Boston, but their buyout offer was rejected by voters in 1924 in favor of retaining nonprofit, locally controlled electric service.  But as rapid growth continued, a Special Town Meeting in 1929 decided to purchase wholesale power from the Boston Edison Company as a way to keep up with increasing demand for electricity without investing in additional generating equipment. Bills were now issued monthly instead of quarterly, with a 10 percent discount for those paid within 15 days.
Home
Contact Us
Notify Me®
Minutes & agendas
Report an Issue
Bids &
Proposals
Minuteman Media Network
Online Payments
Job Opportunities
GIS & Maps
Important Documents
Volunteer
[]